So last night I used this tutorial to make this: 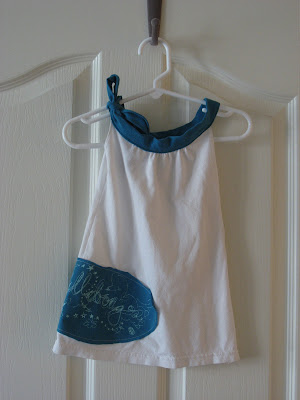 There were a few hiccups to this plan. I was originally going to use my blue shirt to make her a dress. However, Leng had recently gotten rid of a bunch of white t-shirts and I figured I should use them up too. I decided to applique the design from my shirt but use the white shirt as the dress. I can use the rest of the blue to add some applique shapes to other clothes. I am full of plans.

Another setback was that the white shirts needed to be washed. I couldn't even start working for two hours after I got all excited! I folded three loads of laundry while it was washing, so it was probably better that I couldn't start right away. Housework gets pushed aside when I am on a crafting binge. Too bad this crafting binge has lasted for three months. Sorry, family.

I wanted the design to go over the side of the dress, rather than across the front, so I couldn't add it until after the dress was put together. I like to make easy things difficult. The jersey of the blue shirt is very thin and much more stretchy so it was difficult to work with. I pulled out some stabilizer to use but after I finished I realized that I has used totally the wrong stabilizer. I wanted the kind that you leave in, since I was sewing it between the two layers. I managed to use the kind that you have to remove, that is meant to use with embroidery or at the bottom of multiple layers of fabric. So the dress looks cute for the pictures but I will need to re-do the applique.