After a few weeks of working on it in between other things, I finally finished this sweater. I love it! 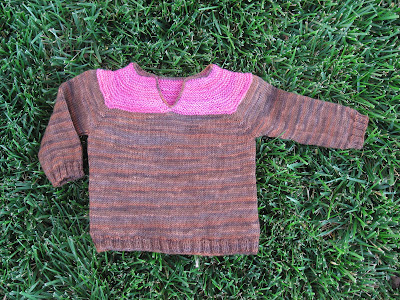 I went about this pattern totally haphazardly, but I think it worked out great. I was inspired by this pattern, but I had this bright pink that I wanted to use. I decided on a garter yoke, without raglan shaping. I spent a lot of time trying to figure out how to do the increases, and how many, and how often, so that it would look nice. There was a lot of frogging in the beginning. Also, I originally thought I'd make a cardigan, then thought I'd leave an opening at the neck and add buttons, and finally decided it looked great without the buttons.
I wanted the edging for the arms and the body to be in garter, like in the inspiration pattern, but the body flipped up bad after I had finished it. I'm sure that with blocking it would have lain flat, but since this is going to the daughter of a non-knitter I didn't want her to have to think about blocking it. At first I decided on a rolled hem, but I got worried that it would roll too much so after even more discussion I moved on to the ribbing. I thought a ribbed edge would not look good with a garter yoke, but I like it.
Now, do I make some matching mittens, and a hat, or just mail this off? This is sort of a special gift, as the baby's grandparents were good friends with both of my parents when they were growing up, and the baby's mother grew up with my sister and me. Our dads still keep in touch. It's fun seeing old pictures of our moms in middle school, and their ridonkulous outfits.
Posted by Mama Mel at 8:51 PM