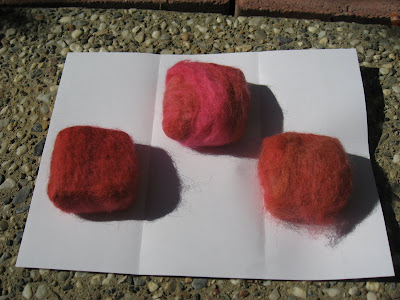 So I finally made some felted soaps. I've been meaning to make these for a while, and it was a lot more difficult than I originally thought.

Then like usual, I got mad and the soaps had to go on a time out for a little while. (Been wondering how that quilt is going? It's been on time out for a few weeks. I still need to ask you for help to see what exactly is going on wrong with it.)

Then I cut off the foot of a pair of tights, wrapped new wool around the already wooly soap, shoved it in the tights, and scrubbed it with a potato scrubber for a few minutes. The one on the left came out really well but the other two have a few spots where the wool is not fully attached and pulls away in small chunks. I don't know if I will fix the other two or just leave them. Also, I meant to give the good one to my friend Lindsay while she was in town, but I totally forgot! Now she's back in Texas, oops!
Posted by Mama Mel at 9:55 AM

Email ThisBlogThis!Share to TwitterShare to FacebookShare to Pinterest
Labels: thingaweek