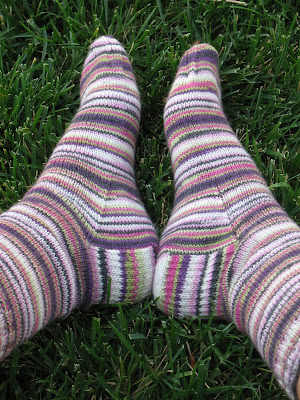 I love these! I knit them at a much denser gauge than the last pair and they are wonderful. I just walked around on the tile in the kitchen and I couldn't feel the stitches like with the last pair. I'm glad I like them since I bought a bunch of sock yarn at the store closing sale. Hopefully I'll finish the others sooner.

My Ravelry project page is here. I started these back in June! Really I worked on the first one for most of that time (knit half and realized it was too loose; knit 3/4 and realized it was too small) in between other projects, and knit the second sock in less than a week. Knitters know of Second Sock Syndrome, where you knit the first sock quickly and the second languishes, but apparently I work oppositely. (Oppositely's a word? I thought I was making that up!)